Everyone has a character, but some people have more character than others. The British, for example, are blessed with more of it than other Europeans. The Germans have intellect and the French have style, but the British are more dogged, brave, resolute and tenacious than either of them. They are steadfast in the face of utter disaster, as in those mighty symbols of the national spirit, the Charge of the Light Brigade, the Titanic and Dunkirk. No nation fails more magnificently. While fighting in the Falklands war, Prince Andrew described being shot at as “very character building”. Perhaps in the light of subsequent events he ought to have been shot at a little more.

The word “character” can mean a person (as in “he’s a sleazy character”), or someone of unusual probity and integrity, or a printed or written letter. In fact, the word originally meant not a person but the sign or description of a person. Your character wasn’t the kind of human being you were but an image of it, and this image could be either true or false to your inner nature. Your outward appearance could either reveal or conceal your inward reality.

People whose talk and behaviour masks their inner being are known as politicians. They say things like “I came into politics to make a difference”, rather than “I came into politics because I’ve always been an ambitious little sod”, while inserting the phrase “very clear” into every second sentence. If they are asked whether it’s true that they have just been sick all over the Speaker of the House, they point out that there are matters of far greater importance to attend to like the cost of living, or the war in Ukraine. They are meticulously scripted creatures, in a way that dinner ladies and truck drivers are not.

Yet they are not scripted in the way that actors are. It wouldn’t make sense to ask whether someone playing Shakespeare’s Cleopatra is sincere or insincere. The terms simply don’t apply, any more than a plumber could be said to mend a pipe sincerely or insincerely. The actor is just doing a job. Politicians, however, are expected to be sincere, and sometimes they are. The problem is that there is so much they can’t say, such as “You’d be barking mad to vote for us”, whereas an actor says all there is to be said. There is nothing he or she is concealing, such as what their character was doing before coming on stage. Since the character didn’t exist at that point, he or she was doing nothing at all. When an actor asked Harold Pinter what he was doing before making his entrance, Pinter replied “Mind your own fucking business”.

Boris Johnson rose to power largely because he was prepared to ditch the script. When someone remarked in his presence that grandiose schemes tended to collapse, he replied “Ah yes, all flesh is grass”, which is not an appropriate verbal move for a politician to make. You are supposed to be practical, not a cracker-barrel philosopher. Even so, stepping outside the script can be part of the script. The comedian Frankie Howerd got some of his biggest laughs from making sardonic comments on the mediocre stuff he was supposed to perform. Clowns spend a lot of time rehearsing falling over their own feet. Even when Johnson is being serious, he maintains a slight ironic distance between his outward bluster and what with pardonable exaggeration one might call his inner self — a distance which suggests that deep down it’s all a game, “it” stretching all the way from the House of Commons to human existence. The only reality is naked self-interest. 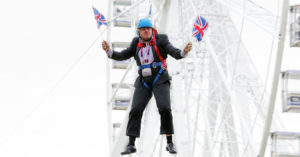 Johnson blurs the line between performing himself and being himself. Clowning around, not taking himself seriously, is an integral part of what he is. He blurs the distinction between theatre and reality, rather as the concept of character does. The idea began in the theatre and was then extended to everyday life. The same goes for the word “person”, which originally meant a mask worn by an actor. It then mutated into “personality”, meaning either a celebrity or someone who is lively and engaging. Some persons have plenty of personality while others, like Ant and Dec, have none at all. In fact, you aren’t even meant to be able to distinguish between them. There are also personages, in the sense of people of elevated status, but most of us are just off-the-peg persons.

“Personal” and “individual” are relational terms. There couldn’t be just one person, any more than there could be only one number or one letter. We are human by virtue of the kind of bodies we have, but we become personal only through our dealings with each another. If none of the faces around the cradle actually speaks to the baby, or communicates with it in some way, it will continue to be human but fail to become a person.

Personalities are bouncy, glittering, larger-than-life types, entertaining but potentially overbearing. They aren’t necessarily eccentric, however, which is where they differ from yet another sense of the word “character”. To have character is to be solid and dependable, but to be a character is almost the opposite. It means being amusingly idiosyncratic, as in “Gad, but he’s a character, sir!” Hovering somewhere between the patronising and the complimentary, it captures a distinctively English view of individuals as quirky, off-beat and lovably eccentric. From Falstaff and Sir Toby Belch to Mr. Pickwick and Miss Marple, each of them is his or her inimitable self. The word “singular” means both one and peculiar. If there is something appealing about eccentrics, however, there is also something alarming. Pushed to an extreme, idiosyncrasy ends up in a kind of madness. It is related to the word “idiot”. Ghislaine Maxwell had a choice

It is this which accounts for much of the popularity of Charles Dickens. Dickens’s characters tend to be notoriously freakish, identifiable by some quaint habit or outlandish physical feature. Jane Austen’s characters speak the common language of polite society, but Dickens’s figures each have their own trade-mark mode of speech, whether quick-fire delivery, verbose ramblings, pious cant or portentous rhetoric. Each of them seems locked into his or her own private world, which randomly collide before bouncing off each other again. Like clocks or mechanical dolls, they just keep repetitively doing their own thing, unresponsive to their surroundings. It isn’t clear whether these oddballs are nothing but their appearances, like people glimpsed for a moment in a crowded street, or whether they have a secret hinterland of emotions and experiences which is inaccessible to others. Like rogues, in the zoological sense of the word, they live apart from the general herd; but if this is true of them all, then there isn’t a herd at all, just a host of deviations without a norm. A very English individualism is built into Dickens’s way of seeing men and women, and though it is wildly entertaining it can also be slightly sinister. Coherent communication between characters falters and falls apart. The eccentric moves quickly into the grotesque. The world is vivid but fragmentary, full of delightful bits and pieces but hard to grasp as a whole.

“Rogue” is a word often used of our departure-lounge Prime Minister, both in the sense of wandering from the pack and of being unprincipled but likeable. Rogues aren’t likeable despite being unprincipled but because of it. Because they kick over the traces, they allow us to do the same vicariously, which is always a source of pleasure. Because it is vicarious, we can smash the conventions and rip up the regulations while remaining eminently respectable. The reputable citizen needs the rogue as Wise needs Morecambe or angels need devils. Without devils, Dostoevsky remarks, the world would die of sheer boredom. The angels may play their harps in ecstasy, but the devils have all the best tunes. Unscrupulous types are said to lack integrity, though it’s not clear what this means. The Oxford English Dictionary defines integrity as having strong moral principles, but also as the state of being whole. What is the connection between the two? Perhaps it’s the idea that being unprincipled corrodes or corrupts your nature so that it’s no longer all there. Or maybe a principled person is consistent, rather than self-divided and self-contradictory. Otherwise there seems no reason why acting morally should mean being complete. Lurking behind this word may be the Romantic-humanist view that we act well when we bring the whole of our being into play, as opposed to being lopsided. But the whole of my being may include an overwhelming desire to murder my hairdresser, which it would be better to repress. Ideas of wholeness, like visions of harmony, are usually suspect.

Boris Johnson is a character without much character. He is a character in the Dickensian sense, but not in the Austenite one. Or, to put it another way, he has too much personality and too little consistent selfhood. It was because he is likely to quote Horace when asked about the rate of inflation that a public bored with plastic politicians elected him. But it was for just the same reasons that he couldn’t govern. It helps to be a character to scramble into power, but you need to have character to stay there.