Six months into Russia’s invasion of Ukraine, Poland has arguably become the war-torn country’s most ardent ally on the European continent. By some measures, it has committed more military assistance to Ukraine than any other country besides the United States, and has taken in more Ukrainian refugees than any nation in the world. During Polish President Andrzej Duda’s visit to Kyiv in late May, Volodymyr Zelenskyy called his Polish counterpart his “friend and brother”.

It seems jarring, then, to hear Russian President Vladimir Putin’s propagandists claim that according to their latest intelligence, Poland is secretly planning to invade and annex the territories in western Ukraine that it used to control prior to the Second World War. Yet this is exactly the narrative that members of Putin’s inner circle like Foreign Intelligence Service Director Sergey Naryshkin and Security Council Secretary Nikolai Patrushev have been pushing for months, buoyed by support from state-backed Russian media over the past few weeks.

Pro-Kremlin actors have gone to great lengths to support this claim. A supposed order signed by a Polish general authorising Polish troops to enter Ukraine’s Lviv and Volyn oblasts was recently circulated on social media before being confirmed to be a forgery, and propagandists like Patrushev have jumped on cherry-picked comments from Duda, who stated in May that “there will not be a border” between Poland and Ukraine. On August 23, the press director for Russia’s Ministry of Foreign Affairs went as far as to compare Duda to Hitler because of his comments on Polish business ventures in Ukraine.

In reality, however, Duda was quoting Zelenskyy himself back in May, and was speaking about prospects for increased cooperation and strengthened diplomatic ties between the two countries. A few weeks later, Zelenskyy revealed that Ukraine was set to grant Poles “special legal status” in Ukraine in response to Poland’s embrace of Ukrainian refugees, and the two countries agreed on joint customs control at their border to facilitate the movement of people and goods between them.

With all this in mind, it’s hard to imagine that the Kremlin earnestly believes its own rhetoric on Poland’s supposed plans to invade Ukraine. Its frequently repeated talking points on this front are best understood as a multi-pronged propaganda effort aimed at the Russian, Ukrainian, and Polish publics that seeks to further justify Russian aggression in Ukraine and to sow discord between Kyiv and its new allies in Warsaw.

But even though such propaganda might seem easily disprovable amid the ever-growing labyrinth of Russian disinformation about Ukraine, the fact that the Kremlin is pursuing it tells us a great deal about how Putin sees the war, nationhood in Eastern Europe, and the nature of international relations in the region itself. In his view, politics in the region have remained fundamentally unchanged since the Thirties and Forties. For him, Poles, Russians, Ukrainians and all peoples of the former Soviet sphere continue to be motivated by nationalistic desires of revenge and irredentism that can be exploited for the benefit of world powers like Russia. Yet this attempt to rouse century-old passions is doomed to fail, and by continuing to employ the political logic of a bygone era, Putin has revealed just how out of touch Russia’s foreign policy is with the realities of the 21st century. The history that Putin’s confidantes are riffing on when spreading claims of Polish invasion plans comes from the interwar period, when the newly independent Polish state controlled territory in modern Ukraine, including the oblasts of Lviv, Lutsk, and Ivano-Frankivsk. Poland had acquired some of these lands during the chaotic period following the First World War under the leadership of Polish general and statesman Józef Piłsudski, who envisioned a return to Poland’s glory days prior to its dismemberment by Russia, Prussia and Austria in 1795.

In the Ukrainian territories, Polish authorities’ heavy-handed response to local Ukrainian demands for autonomy led to the foundation of the Ukrainian Insurgent Army (UPA), which, after Poland’s defeat at the hands of Nazi Germany, launched a series of massacres in 1943 that resulted in the deaths of up 100,000 Polish civilians. In 1945, Poland lost these lands to the USSR, and they have remained part of independent Ukraine since 1991.

The UPA’s killings of Poles during the war, which Poland considers to be an act of genocide, remain a contentious issue, and Duda has requested that Ukraine recognise it as such as recently as this July during an official commemoration. But unfortunately for Putin, Poland has regarded the territorial disputes that lay behind the violence as a closed case for decades. As Duda stated at this year’s memorial for the victims of the wartime massacres, the recognition of the UPA’s massacres “was not about and is not about revenge, about any retaliation — there is no better proof of this than the time we have now”.

According to recent polls, Ukrainians are now inclined to trust Poland more than ever — some 86% of Ukrainians from all regions of the country reported that their view of Poland has improved since the start of Russia’s invasion, with 72% stating their opinion has “improved a lot”. And in an environment where both the Polish and Ukrainian populations are now overwhelmingly wary of Russian propaganda, disinformation about Polish plans to regain its Ukrainian territories is unlikely to spur a nationalistic falling-out over either the legacy of the UPA or Poland’s territorial legacy in western Ukraine.

But there is another, broader aim of Putin’s propaganda effort on this matter: if Russia can claim that Poland and other European states are covetous of other countries’ land, then Russia can do it too. “The thing is that there are quite a few locations on the European continent where neighbours are silently interested in the territories of adjacent states,” Naryshkin stated earlier this month, according to Russian state media agency TASS. “So if Poland opens this Pandora’s box, there will be hell to pay.” 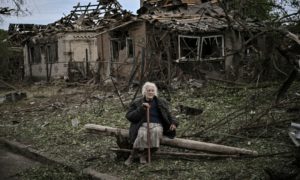 This is the central, if implicit, assertion that Putin and his loyalists are making when they spread lies about Poland’s intentions — that Russia’s behaviour in Ukraine is far from abnormal. It is difficult to read Naryshkin’s quote here without recalling Putin’s own characterisation of his invasion of Ukraine as “our responsibility to return land” back to Russia during a conference in June, where the Russian president seemed to compare himself to Tsar Peter the Great.

Even if the Poles do not have plans to recapture their lost territories in Ukraine, Putin is certain they would eventually like to do so — after all, why wouldn’t they? In Putin’s worldview, it is only natural for nations to seek to regain past glory like Piłsudski had, either by conquering land from other states, outmanoeuvring neighbours, or settling scores over unresolved grievances. By the same token, for countries like Ukraine, a historic enemy must always be an enemy, and blood that was once spilled can always be spilled again.

For Putin, international politics is a zero-sum game in which one power ultimately seeks to dominate others. In pursuing their disinformation campaign about Poland, Putin and the rest of the Kremlin are projecting their own worldview onto neighbouring countries, assuming that the nationalistic triggers that motivated violence between Poles, Ukrainians and various other Eastern European peoples remain as potent now as they did in 1943.

But the ship of history has long sailed in both the Polish-Ukrainian borderlands and across much of Europe, and Russia’s leaders have seemingly been left behind. Only now are they waking up to the reality that common defence can actually work, and that countries that were once the bitterest of enemies can look beyond their past to stand up to cynically nationalistic, unilateralist powers of the sort that the Russian state has now become. In seeking to exploit the wounds of history, Russia has found itself trapped by it.