After nearly two decades of stagnant wages, lethargic economic growth and public service atrophy, Britain has been prescribed more of the same. After yesterday’s Autumn Statement, we are set to have the punitively high taxes of southern Europe, the leaden atmosphere of northern Europe, and the dire public services of the United States. All in the middle of a recession, a surge in inflation, the highest taxes in 70 years, and a cost-of-living crisis. Thank you very much, Chancellor. No wonder broadcasters are wont to mispronounce Jeremy Hunt.

“You do not need to choose either a strong economy or good public services. With the Conservatives, and only with the Conservatives, you get both,” Hunt told the Commons, with a straight face. As he well knows, public services are buckling under the strain of a decade of austerity. Meanwhile, the OBR expects our weak economic growth to facilitate the cratering of household disposable incomes by the largest amount since records began in the mid-Fifties, yanking them back to where they were nearly 10 years ago.

In another life, Hunt was the longest-serving Health Secretary in history, who hung on in post against Theresa May’s wishes until he received a £20 billion additional “birthday present” spending commitment for the NHS. Now that Hunt is on the other side of the negotiating table, holding the purse strings, there will be no such profligate gift-giving.

“This government has forced our economy into a doom loop where low growth leads to higher taxes, lower investment and squeezed wages, with a running down of public services — all of which hits economic growth again,” Shadow Chancellor Rachel Reeves replied. Her diagnosis is absolutely correct — atrophy of growth has led to necrosis of public services. Hunt may claim that the Tories offer both a strong economy and public services, but they self-evidently offer neither.

For a statement that mentioned the word “growth” 28 times, Hunt’s plan to achieve it was remarkably unambitious and involved little self-reflection, citing energy, infrastructure and innovation as his three priorities. This is a huge red flag. While these matter, they pale in comparison to the economic damage wrought by a planning system that prevents the building of homes in our most productive regions, thereby strangling the supply of ambitious, productive workers to productive jobs and businesses. 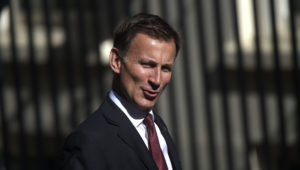 What Hunt can learn from Truss

Not that this should be a surprise; this outlook mirrors that of his boss, Rishi Sunak, who said earlier this year, in a lecture on growth, that growth required merely “a new culture of enterprise”, leaving supply-side reforms to planning and housing unmentioned. Those reforms might be worth upwards of 30% of GDP — but why trouble yourself with that? While Hunt paid lip service to the motivations of Liz Truss and Kwasi Kwarteng’s disastrous September mini-budget, if he is not prepared to take on what Truss rightly identified as the anti-growth coalition, he will surely fail in his mission to make Britain a better country. The supply-side baby must not be thrown out with the unfunded tax cuts bathwater.

It’s easy to blame our economic and fiscal headwinds on the mini-budget. But the seeds of this crisis were sown long before Truss and Kwarteng drove a truckload of fertiliser to the farm to encourage growth, only to accidentally blow it up before it reached the fields.

Reputation for economic competence is built over decades, but can be lost in minutes. And the Conservative Party is now finding out how it feels to have an economic narrative set up by their opponents. Much as Labour was blamed for the financial crisis by the Tories, despite its global nature, the Conservatives are being painted by their opponents as being responsible for rising interest rates, the increase in the cost of living ,and the impact of the recession we’ve just entered.

“At the very least, he could have offered an apology but, no, instead he says his predecessor was correct in his analysis at the mini-Budget that put our economy into free fall,” Reeves taunted from the Opposition despatch box. But none of the pain we are going through has its origin in Kwarteng’s mini-budget. While it certainly didn’t help things, as soaring government gilt yields showed, most of Kwarteng’s economic, if not political, impact was essentially wiped clean by Hunt’s scrapping of almost all the mini-budget measures. The cost of government borrowing is back to where it was before that touchpaper was lit. Rather, the war in Ukraine and the resultant sanctions and European diversification from Russian gas are a far larger source of inflation than those now-reversed spending commitments. We are also still wading through the backwash of the inflationary monetary and fiscal stimuli introduced to combat Covid-19, which unleashed unintended inflation. Supply chains are also still being disrupted by the pandemic, increasing the cost of services and manufactured goods — goods which are even harder to source given the ongoing lockdowns in China that are holding back the Chinese economy.

These increasingly bitter choices, worsening living standards and dilapidated public services are the price we pay for actively choosing to reject economic growth. “Anyone who says there are easy answers is not being straight with the British people,” Hunt said yesterday. Economically, the answer is very easy — take your foot off the brake by building. But politically, Hunt is right: the challenge is totemic.

William Hague said of the euro that it represented a “burning building with no exit”. Well, our burning building has exits. We could choose to build more, and stop placating the anti-growth coalition — but we would have to walk through the fire to do so. Does the Conservative party have the stomach for it? Of course not. If you needed an indication of how likely the party is to face down its elderly voters, the triple lock on pensions was maintained in this Autumn Statement. Pensions will grow with inflation, while workers suffer real-terms pay cuts. And we wonder why there’s no growth. ‘Twas ever thus.