Warmer-than-average temperatures may have spared Europe from the worst effects of the energy crisis, but that is about to change: with temperatures predicted to plummet in the coming weeks, heightened demand for dwindling (and very expensive) supplies of natural gas will seriously test Europe’s fragile energy networks — potentially to breaking point.

In Germany, the Office of Civil Protection and Disaster Assistance recently issued a near-apocalyptic advisory telling people what to expect in the event of a blackout: “The telephone is dead, the heating doesn’t come on, there is no warm water, the computer goes on strike, the coffee machine stays off, there is no light.” The agency urged households to stock up on battery-powered flashlights and candles, and even suggested camp stoves to prepare small meals. Elsewhere in Europe, governments are preparing food distribution networks that can function through a blackout.

A colder-than-normal winter is expected in the UK as well. Ofgem has said there is “a significant risk” of gas shortages, which could affect electricity supplies. And with more than 3 million low-income UK households unable to afford to heat their homes, the cold weather, combined with potential energy shortages and higher prices, could have lethal consequences, and not just in Britain. According to one disturbing study published in The Economist, based on the historical relationship between mortality, weather and energy costs, the death toll from the energy crisis across Europe could exceed the number of soldiers who have died in the Ukraine war so far. Depending on temperatures, prices and government support measures, between 30,000 and 300,000 deaths above the historical average may be recorded across the continent this winter. Sanctions kill — we’ve known that for a long time (just ask the Iraqis); these, however, are probably the first sanctions in history that could kill the sanctioners.

Meanwhile, EU countries have reduced their gas demand by a quarter, according to the Financial Times as industry cuts back or stops production altogether following the rising costs. In the coming months, this will mean higher prices and possible shortages in energy-intensive industries such as metals, chemicals (including fertiliser), plastic and food. Moreover, analysts warn that without increased supplies, gas shortages could persist for years in Europe, regardless of the lower demand. This would effectively mean the long-term deindustrialisation of the continent — with the chaos, political instability and unrest that would go along with that.

It’s no surprise, then, that European leaders are looking for a way out of the hole they dug themselves by joining the US in its proxy war against their main gas provider — even as the EU itself continues to sabotage any possible diplomatic solution to the conflict. Only last week, French president Emmanuel Macron marked his profound difference with the US (and EU) stance on Ukraine during an interview for the French channel TF1, in which he said that Nato member states may have to offer “security guarantees” to Russia when Moscow and Kyiv resume negotiations. “This means that one of the essential points we must address — as Putin has always said — is the fear that Nato comes right up to its doors and the deployment of weapons that could threaten Russia,” Macron said. “That topic will be part of the topics for peace, so we need to prepare what we are ready to do, how we protect our allies and member states, and how to give guarantees to Russia the day it returns to the negotiating table.”

Macron has always had a more “realist” approach to the issue than his colleagues, yet this was the first time a European leader suggested that Russia’s decision to invade Ukraine may have been motivated by legitimate security concerns. Before the invasion, Putin said at a joint press conference with Macron in Moscow that Russia would aim to obtain replies from the West to its main three security demands. These included stopping any future Nato enlargement, presenting missile deployments near its borders, and a scaling back of Nato’s military infrastructure in Europe to 1997 levels.

Back then, the US and its Western allies called the Russian demands “non-starters”; however, after ten months of war that have ravaged Ukraine, an increasing number of people in the West are considering the possibility that, as Charles Kupchan recently wrote in the New York Times, “sooner rather than later, the West needs to move Ukraine and Russia from the battlefield to the negotiating table”, and that a hypothetical deal between Russia and Ukraine would necessarily have to include a commitment by Ukraine to “back away from its intention to join Nato”. Kupchan even goes on to admit that “Russia has legitimate security concerns about Nato setting up shop on the other side of its 1,000-mile-plus border with Ukraine”. Chancellor Olaf Scholz also marked his distance from the US’s hardline stance by talking to Putin for the second time in successive months, and suggesting that Europe should return to the pre-war “peace order” with Russia and resolve “all common security issues” if Putin would be willing to renounce aggression against his neighbours. Yet for all the talk of the war in Ukraine making “the EU and the transatlantic alliance stronger than ever before”, as Scholz recently claimed, the reality is that transatlantic relations have been growing increasingly strained for months. Several European officials have accused the Americans of profiting from the war — and from Europe’s hardship. In their attempt to reduce their reliance on Russian energy, EU countries have turned to gas from the US instead — but the price Europeans pay is almost four times higher than the same fuel costs in America. Macron said high US gas prices were not “friendly”, while Germany’s economy minister has called on Washington to show more “solidarity” and help reduce energy costs. So far, the US has ignored Europe’s concerns.

On top of that, sales of American military equipment in Europe are booming: since Russia’s invasion of Ukraine, countries in the EU have pledged to beef up their arsenals, and the US — which provides most of the weaponry — has been the biggest beneficiary. “The fact is, if you look at it soberly, the country that is most profiting from this war is the US because they are selling more gas and at higher prices, and because they are selling more weapons,” one senior official told Politico.

The war, however, isn’t the only crack in EU-US relations. Anger has also been mounting in Europe over America’s Inflation Reduction Act, a $369-billion package of subsidies and tax breaks enacted by the Biden Administration to boost American manufacturing (under the guise of the “green shift”). From a European perspective, the bill constitutes a protectionist measure that encourages companies to shift investments from Europe and incentivises customers to “Buy American”,  dealing a serious blow to Europe’s already struggling industry. 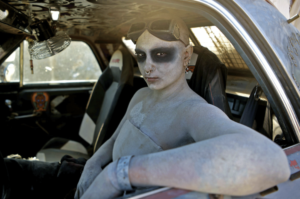 The paradox of Degrowth Communism

The EU’s chief diplomat, Josep Borrell, has called on Washington to respond to European concerns. “Americans — our friends — take decisions which have an economic impact on us,” he said. “Is Washington still our ally or not?”, asked one clearly traumatised EU diplomat, while Macron referred to the Inflation Reduction Act as “super aggressive” towards European companies. These choices “will fragment the West because they create such differences between the US and Europe, that those who work in these companies/industries will simply decide not to keep investing on the other side of the Atlantic”, he said.

While such complaints may seem reasonable, one might ask why the continent’s politicians are only now waking up to the reality that the war in Ukraine is, as Nicholas Vinocur, Editor-at-large of Politico Europe, has observed, “just one facet of the US’s larger strategic duel with China, which will always take precedence over EU interests”. From a US perspective, this doesn’t mean simply decoupling from China, but rethinking the entire paradigm of globalisation by rebuilding the country’s manufacturing capacity and making the US self-sufficient in a whole series of strategic industries. This is really what the Inflation Reduction Act is all about.

In this context, Europe isn’t seen as a strategic ally but as a competitor and a rival, which the US has every interest in keeping in a subordinate position. It does not seem unreasonable to posit that one of the aims of America’s strategy may be to strengthen its own hegemony over the continent and end Europe’s aspirations to “strategic autonomy”.

“America has no permanent friends or enemies, only interests,” Henry Kissinger said. Today, these words seem strikingly prescient. America’s interests no longer seem aligned with Europe’s (if they ever were). The sooner Europeans realise that, the sooner they can get to work on something they’ve been neglecting for a very long time: thinking about where their own interests lie.