“Are we to paint what’s on the face, what’s inside the face, or what’s behind it?” Pablo Picasso once asked. Through the intersecting planes of his Cubism, the artist achieved all three, portraying himself as a god-like, omnipresent creator. But at what cost — and at whose expense?

This May, the Metropolitan Museum of Art in New York City will sell Picasso’s first major sculpture, “Tête de femme (Fernande)”, at auction. Christie’s have placed an eye-watering estimate of $30,000,000 on the piece. Lauded as the work which launched Analytical Cubism, it has cemented Picasso as a master of modernism. But few have acknowledged the story of the woman who inspired it: Picasso’s first great muse, Fernande Olivier.

Born Amélie Lang, Olivier first met Picasso in 1904, while working in Montmartre as an artist and model. After moving in with him, she posed for more than 60 portraits, both in Picasso’s Paris studio and during trips abroad. One summer in Spain, the artist created a series of paintings focused on Olivier’s head from multiple viewpoints, capturing her high cheekbones, straight nose and full lips. These experimental portraits culminated in “Tête de femme”.

Some 20 years after her seven-year relationship with Picasso ended, Olivier attempted to create her own self-portrait, writing a series of memoirs about their life together. Six extracts were published in Le Soir before Picasso, who was by this time both famous and wealthy, used lawyers to silence her. Powerful men, unfortunately, have a history of misusing NDAs and making settlements to protect their reputations — and cover up crimes against women. How Weinstein silenced everyone

Eventually published, Olivier’s account exposed an abusive relationship in which Picasso prevented her from both painting and modelling for other artists. He believed that women should not “trespass on men’s preserve” and would even keep her locked inside the house while he went out. While he immortalised her in art, he didn’t value his muse as an artist or woman in her own right. It’s difficult not to see a desire to control in “Tête de femme” — viewers are not only invited to imagine the artist moving around his model while working, but to circle the sculpture and touch its surface themselves.

Olivier had gifted Picasso his seminal subject: from this point onwards, the female form dominated the artist’s practice, across all media. As with any abuser, a pattern emerged in Picasso’s life and art: a woman would provide him with inspiration for his greatest portraits, before being discarded for a younger muse. He even took pride in this attitude: “Every time I change wives I should burn the last one. That way I’d be rid… You kill the woman and you wipe out the past she represents.” Of course, he was still happy to keep making money from the art each one had inspired.

Although Picasso’s muses have frequently been used as chronological markers in his career, their influence over his ever-evolving style has been downplayed and overlooked. This was a narrative which the artist constructed: “Inspiration exists, but it has to find you working”, he once exclaimed, presenting himself as a creative genius, whose success was born out of his talents, and toil, alone. But his version of events is unmistakably a myth. In 1917 Picasso met Olga Khokhlova, a ballet dancer with the Ballets Russes, who became his first wife. Khokhlova left the company after meeting him; like Picasso’s other muses, she served his creative practice over furthering her own career. During his marriage to Khokhlova, Picasso adopted thinner, more lyrical lines and a Neoclassical approach to depict his muse, who appears poised in countless portraits like “Portrait d’Olga dans un fauteuil” (1918). After the couple’s child, Paulo, was born in 1921, Picasso began to explore motherhood and domesticity, in works which present Khokhlova as a maternal muse in the style of the Madonna.

Unsurprisingly, in a secondary art market still dominated by male dealers and collectors, Walter sells particularly well at auction: “Woman sitting by a window (Marie-Therese)” (1932) achieved $103.4 million at Christie’s in May 2021.

But, of course, Picasso soon needed new inspiration. In stark contrast to golden girl Walter, it was dark-haired Dora Maar who next entered his life. Another artist — she was a successful Surrealist photographer — Maar left an indelible mark on his practice. In her darkroom, she taught him to develop black and white photographs, while outside it she indoctrinated him in her ultra-Left-wing politics; both infused not only Picasso’s portraits of her, but the epic anti-war mural, “Guernica” (1937).

Maar was the one who found Picasso a studio large enough for his huge protest painting — the site was the former headquarters of her radical political group, Contre Attaque. Inside the space, Maar photographed Picasso making the mural and helped him with sections of painting it. Leaving his bright palette behind, he created “Guernica” in black and white, influenced by Maar’s photography. There is even a darkroom spotlight in the picture, beneath which appears, for the first time, Picasso’s famous “Weeping Woman”. 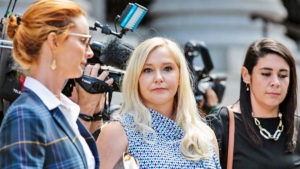 The power of victims who settle

That same year, Picasso painted a stand-alone portrait of Maar as “The Weeping Woman”, crying glass tears. If you look closely, you can see black war planes in her eyes; Maar was a profoundly political being. But the portrait is often read, in typically patriarchal narratives that frame women as mere partners, as an inflection of her troubled relationship, and the abusive way in which Picasso treated her. He was still involved with Walter when it was painted, and enjoyed pitting the two women against one another.

Walter once confronted Dora Maar in Picasso’s studio, insisting that the artist’s new muse leave. Picasso continued to paint while they argued, before Walter turned to him, demanding, “Make up your mind. Which one of us goes?” He later recalled, “It was a hard decision to make. I liked them both, for different reasons: Marie-Thérèse because she was sweet and gentle and did whatever I wanted her to, and Dora because she was intelligent … I told them they’d have to fight it out themselves. So they began to wrestle.” Picasso later referred to this incident as one of his “choicest memories”.

The truth was, the artist wished viewers to see him in possession of not one romantic muse, but many. In a double portrait from 1937, “Femme au béret et à la robe quadrillée” (1937), Maar’s half profile has interspliced with Walter’s; fusing his muses’ faces, Picasso appears to be boasting on the canvas. He was not subtle about the way he abused his lovers. The painter once declared, “there are only two kinds of women, goddesses and doormats”.

In Ancient Greek mythology, muses were the former: there were nine goddesses on whom artists, musicians and poets could call to be endowed with divine inspiration for their creations. But in the modern age, Picasso was one of many who attempted to shift all power to the male artist, portraying his talents as innate and obscuring the input of his muses. While elevating these women to goddesses in his masterpieces, Picasso was destroying them at home. Upon her separation from Picasso, Maar suffered a nervous breakdown; Walter committed suicide. Picasso wasn’t the only one to abuse his muses. Italian sculptor Gian Lorenzo Bernini had the face of his unfaithful model, Costanza Bonarelli, slashed. Edward Hopper’s wife, the artist Josephine Nivison Hopper, helped her husband launch his career; he physically abused her and banned her from painting. “If there can be room for only one of us, it must undoubtedly be he,” she wrote in her diary. Today, she is recognised primarily as the isolated female figure in many of Edward Hopper’s paintings. Seeking to paint visions of an earthly paradise, Paul Gauguin, too, mistreated his teenage models in Tahiti. In 2020, London’s Royal Academy included a disclaimer to accompany Gauguin’s portraits of young Polynesian girls, who he not only fetishised, but sexually exploited.

Indeed, in the wake of #MeToo, galleries are starting to recognise the overlooked — and often pivotal — role of the muse. The Tate Modern dedicated a solo show to Dora Maar in 2019/20, celebrating her experiments in photography, photomontage and painting, while discussing the deep effect she had on Picasso’s practice. (The show would have been good regardless of that relationship.) Perhaps the Met will use the millions it will make from Olivier’s body to enrich its collection with works by female artist-muses like Maar. For too long, these women — enclosed in golden frames, hung on the walls of major museums and sold for millions at auction — have ensured the legacy of men who exploited them while also depending on them, without getting any credit.

“To my misfortune, and maybe my delight, I place things according to my love affairs,” Picasso once remarked. Having made a fortune out of his lovers, it’s rich of the artist to suggest these partnerships were a “misfortune”. His career was built on women whose own needs, careers and stories he deliberately suppressed. Patriarchal accounts of art history have perpetuated this myth of the “Spanish genius”, while the art market has continued to cash in on it. It’s clear, though, that Picasso, choosing many muses who were creatives, extorted their talents.

From his first muse until the last, Picasso was intent on claiming ownership of each woman in his life. He packaged these individuals, and the intimate relationships he had with them, as a saleable product to make him profit. But portraiture is a two-way process; the results reveal both model and artist. Picasso’s expose a man obsessed with presenting himself as an all-powerful creator; but, if we look again, we might see that he, like male artists throughout history, is also a product of his muses.