Nothing produces true believers today quite like the environmental movement. Gluing yourself to London or pouring soup over a priceless painting is all in a day’s work. For your green stunt to stand out, you need to do something eye-catchingly disgusting such as pouring human faeces over a statue of Captain Tom.

For conservatives, it may be tempting to dismiss green activism as a stalking-horse for communism, a movement that has certainly produced enough ideologues in the last century. And it’s true that a great deal of green activism is broadly Left-aligned, while for much of my lifetime, economic and technological growth has been broadly associated with a Right-liberal worldview espoused by Margaret Thatcher. Recently that has roared to life again under the questionable guidance of Liz Truss, with her rants against the “enemies of growth”, a group, in her view, that includes environmentalists.

It seems that defending trees in particular drives many “enemies of growth” to extremes. One famous Left-wing tree hugger and enemy of Thatcherite growth, “Swampy”, was briefly famous in 1997 for living in a tunnel under the Newbury bypass site, to protect ancient woodland from being destroyed.

But despite what Right-liberals say, “tree hugging” — and direct action — is by no means confined to the Left. Once you leave the relatively safe confines of Roger Scruton and promoting land stewardship (like our King), a green movement shorn of Left-wing shibboleths reveals two things.

First, just how much of the moral framework we still inhabit, even in a secularised world, is unreflectingly Christian. And second, that contrary to how it may seem from a glance at the self-styled pagans of Left-leaning green activism, in truth one of the last remaining bulwarks against genuine paganism may be those remnants of Christian thought that persist in the progressive moral framework.

As many recent writers have observed, the roots both of liberalism and its mutant child, progressivism, lie in our Christian heritage. Nor, as thinkers such as Jacques Ellul and Lewis Mumford have argued, is it easily possible to separate our extractive relation to technology — the principal driver of climate change — from that heritage.

Nowhere is this revealed more clearly than the points where the green movement overlaps with the far-Right. For where environmentalism is concerned, in truth, Left and Right are obsolete. Instead, the real battles concern deep questions such as our standing relative to other species, the nature and value of progress and technology, the value of human freedom, and the value of humans ourselves. Most of this, whether we like it or not, still takes place within the dying embers of Christianity. And the coming battle over climate policy is fundamentally over which parts of this Christian heritage we’ll end up sacrificing, as we confront the end of cheap energy and never-ending growth.

Two decades before Swampy hit the headlines for burrowing under the Newbury bypass site, one Theodore Kaczynski was roaming the woodlands around his area of rural Montana on a campaign of environmental sabotage. His methods, though, were orders of magnitude more focused and brutal. According to letters he later wrote from prison, Kaczynski spent two decades as a proto-Swampy on steroids: stringing wires across motorbike trails, burning logging machinery, pouring sugar into the tanks of motorised vehicles and smashing up holiday cabins, in a one-man campaign against what he called the “octopus” of technology. Gen Z’s worship of the Unabomber

Kaczynski is better-known as the Unabomber: he sent 16 mail bombs to university and corporate targets, killing three and injuring 23 over a 20-year campaign. He’s also the author of Industrial Society and its Future, a 35,000-word manifesto that attacks Leftism and justifies bombings as an extreme but legitimate start to a necessary revolution against the harms of “industrial society”.

For Kaczynski, the most offensive feature of industrial society is its centralised and impersonal systems of control, from media propaganda to huge corporations: all methods aimed at adapting human nature to fit the needs of the machine. In Kaczynski’s view, “industrial-technological society cannot be reformed in such a way as to prevent it from progressively narrowing the sphere of human freedom” which he defines as “being in control […] of the life-and-death issues of one’s existence”, such as food, clothing and shelter, as well as going through “the power process” which is to say setting and attaining meaningful goals via one’s own agency.

“Uncle Ted” has become a cult figure of Gen-Z veneration, but his legacy is an ambivalent one. Some on the green “anarcho-primitivist” subculture celebrate his call to return to simpler ways of life. Meanwhile, “incels” and other political fringe groups are drawn to his willingness to kill in order to get his message out; Kaczynski’s manifesto has been quoted by subsequent terrorist attackers. But he is not the only individual inspired to political extremism by tree felling, or the only environmentalist associated with shady memes on the far-Right.

“Eco-fascist” is used (again, usually by those Right-liberals who are definitely not “enemies of growth”) as an epithet to describe anyone who proposes authoritarian measures to address climate change. “Eco-fascism” proper, though, is an altogether stranger and darker doctrine. Energetically disavowed across the more mainstream environmental movement, it’s a fringe worldview that argues against immigration and for sharp reductions in the human population, sometimes forcibly and (per some proponents) along racist lines. Why the Unabomber’s Manifesto is essential reading

In this, it’s not new: some crossover of “green” and nativist thinking goes all the way back to the “Blood and Soil” doctrines of Nazi-era Germany, and informs the thinking of the Nazi occultist and animal-rights campaigner Savitri Devi, whose 1959 The Impeachment of Man argued that humans shouldn’t be set above animals.

But what does characterise this thinking, just like that of Nazism, is its profound repudiation of Christian values. This comes across clearly in the doctrine of deep ecology, which — like Devi’s writing — argues that we shouldn’t grant humans any kind of special value. Rather, deep ecologists argue that we should reserve this reverence for the biosphere as a whole.

This sounds harmless and hippy-ish enough, until you consider its ramifications — notoriously set out by the king of eco-fascist tree-huggers, the Finnish deep ecologist Pentti Linkola (1932-2020). Again inspired to activism by the destruction of ancient woodland, much of what’s shocking to mainstream sensibilities in Linkola’s writing comes from his blunt willingness to consider profoundly anti-humanist (which is to say non-Christian) solutions to the ecological crisis.

Every Christian or humanistic value, in Linkola’s view, is not just useless but actively pernicious. Technological progress is the enemy of the natural world, while the idea that there’s something special about humans justifies its exploitation. The belief that we’re all equal and valuable legitimises human multiplication beyond the earth’s carrying capacity, while egalitarian political systems are a disaster because they stop authoritarian political leaders from taking effective action to prevent us careering toward extinction. And human rights are not the foundation of civilisation, but “a death sentence of all Creation”.

In the place of human exceptionalism, Linkola deems diversity and harmony in the biosphere as the highest value: “The whole, the system, the maximum amount of species and diversity is the most sacred thing.” And from this it follows that there’s a natural ceiling on how many of any given species can be supported. In his view, we have long since surpassed that limit, thanks to our use of technology. Therefore, any means which might halt technological development and reduce what he calls “the human flood” are in principle justified. 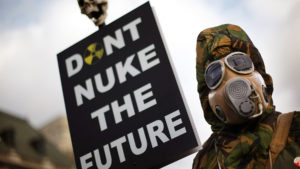 We are the authors of our decline

For him this includes euthanasia; state control of reproduction, including forced abortions, forced sterilisation and infanticide; and even mass genocide. “If there were a button I could press, I would sacrifice myself without hesitating if it meant millions of people would die,” he declares.

Linkola is a fringe figure in environmental thinking, a fact that attests to the hold Christian values still have, for all that observant Christianity has been declining across the West. Inasmuch as they violate these white-labelled forms of Christianity, even relatively dilute descendants of Linkola’s extreme ideas, such as the militant group Deep Green Resistance, get tarred with the “ecofascist” brush.

But it would be simplistic to call Kaczynski the more “Christian” thinker here: he has been sharply critical (from prison) of “anarcho-primitivism”, a movement that proposes total abandonment of technology. In Kaczynski’s view, by claiming that this would produce more sex equality and sharing, and less racism and violence, this in practice smuggles “mushy utopianism” — actually a disguised set of Christian-heritage values — into a revolutionary vision that ought to be grounded and practical.

Meanwhile, more conventionally radical Left-wing environmental arguments are often overtly hostile to Christianity, usually (paradoxically) from a vantage-point that places central importance on deeply Christian-inflected tenets such as egalitarianism and the value of love. But perhaps the question isn’t “who is the inheritor or rejector of the Christian legacy” as “which bits are being jettisoned, and by whom?”. Overtly post-Christian progressive environmentalists such as the examples linked above, for example, often reject the Christian idea that humans take precedence over the natural world, that the cosmos is ordered hierarchically, or the belief that we’re all born fallen. Green salvation, in this vision, means we need only reject hierarchy and free ourselves from the taint of civilisation for peace and harmony to reign.

Or perhaps we could abandon democracy? It is, after all, increasingly clear that few environmentalists place much faith in democratic politics to address the existential crisis most believe we now face. If Linkola thinks democracy is a disaster, and Deep Green Resistance argue for violent revolutionary eco-vanguardism, recent demands by the otherwise broadly progressive group Extinction Rebellion for a “citizens’ assembly” to address climate change also look, on closer inspection, suspiciously like an extra-democratic body of appointees.

Alternatively, instead of giving up democracy, we could give up our affinities to home and family, in defence of the universal value of human life? Gaia Vince’s 2022 Nomad Century argues for large-scale technocratic efforts to accommodate mass migration driven by climate change, a policy that presupposes the fundamentally Christian idea that all humans have equal value and it’s wrong to prioritise your kin, tribe or nation.

Of course those on Liz Truss’s side will wave away the prospect of hard choices. We can set aside eco-alarmism and go on chopping down trees that took hundreds of years to grow, in the name of growth. But even this, in effect, means choosing the fundamentally Christian faith in progress — at the expense of literally every other Christian value.

And if that seems pagan enough, out where the ashes of Christianity are cold and grey lurk those, like Linkola, who suggest we should retrieve the idea of human stewardship of the natural world — but at the expense of valuing the human full stop. And it’s in these ideas, even more than the barbarous vandalism of the “growth at all costs” cabal, or what Kaczynsky called the “mushy utopianism” of the “anarcho-primitivists”, that we see a glimpse of what a genuinely post-Christian paganism looks like.

Those progressives who cheer on the decline of observant faith in the West, and denounce the Christian Right, would do well to reflect on how much less they’re going to like the post-Christian Right.