The other day, I was pulled up short by a poster on the tube. I didn’t clock what it was advertising, but I was struck by the text: “Guess who’s back? Back again. Guess who’s back? Tell your friends.” It’s a paraphrase of the opening lines to Eminem’s 2002 single “Without Me”, one of several of the MC’s songs which has more than a billion streams.

My daughter, who wasn’t born when it came out, can recite every line, including the time-capsule references to Dick Cheney’s heart condition and a disrespectful Moby video. As Eminem gobbled up the detritus of American culture like Pac-Man, many of his jokes were doomed to age badly, but you don’t need to clock the allusions to get a kick out of his mischievous vitality 20 years later.

Eminem was so central to pop culture in 2002 that he could legitimately launch an album with a song about the importance of his return. Nobody inspired more arguments. Rappers had inflamed politicians and the press before, but none had done so with albums that sold 25 million copies a piece.

The furore over Eminem’s first album was large enough to be the central theme of his second, and the fuss around that one fuelled the third. A bridge-builder of sorts, he managed to unite Christian conservatives with feminists and LGBTQ groups. The Sun accused him of promoting “torture, incest, murder, rape and armed robbery”. (Not just rapping about these subjects, by the way — promoting them.) The editor-in-chief of Billboard condemned him for making “money off the world’s misery”. Culture warrior Lynne Cheney told a Senate hearing: “It is truly astonishing to me that a man whose work is so filled with hate would be so honoured by his peers.” Sadly, the line often attributed to George W Bush (“the most dangerous threat to American children since polio”) was a fabrication, but it was sufficiently credible to appear as the epigraph in Anthony Bozza’s bestselling 2003 biography Whatever You Say I Am. At least Eminem’s notoriety predated social media. If Twitter had existed back then, it might have fried his brain beyond repair.

How can rap’s former enfant terrible be turning 50? It wasn’t guaranteed. In 2001, Joan Smith wrote in the Guardian: “Validating his rage, which is what his fans are doing, is hardly going to help someone whose biography suggests he is already some way down the path to self-destruction.” But here is — alive, well and, as of this year, America’s best-selling singles artist of all time. 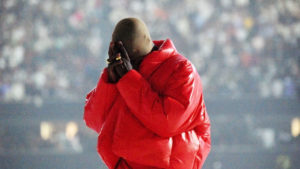 Nobody argues about Eminem anymore, which is good for the person but less so for his music. In 2000’s paranoid, semi-sarcastic “The Way I Am”, he declared “I am whatever you say I am,” but now that nobody’s making grand claims about him for good or ill, he seems unsure what he is. After his 2005 singles collection, Curtain Call, he dropped out of sight for four years to wrestle with writer’s block, his grief over his murdered friend Proof and his addiction to prescription drugs. Since returning to music with Relapse in 2009, he has never quite managed to find a convincing second act. The recent Curtain Call II lays bare an ongoing identity crisis as he bounces between throwback provocations, sentimental soft-rock hooks, goofy jokes, lyrical showboating and collaborations with Ed Sheeran and Pink. Some tracks sound great but none has the life-or-death necessity of his early years. “I’m not the person I was at 28,” he told Vulture in 2017. “The passion is still there but the rage mostly isn’t.”

Eminem’s most enjoyable late album is 2013’s The Marshall Mathers LP 2, a shameless nostalgia trip on which his tongue-twisting virtuosity is not just the medium but the message. When I saw him headline Wembley Stadium around that time, I felt like I was watching an athlete as much an artist. “Rap God” entered the Guinness Book of Records for featuring the most words (1560) in a hit single and included Eminem’s explanation for his initial success: “Simply rage and youthful exuberance/ Everybody loves to root for a nuisance.”

In the same song, he boasts that he’s been having hits “ever since Bill Clinton was still in office”. I’ve read three new histories of the Nineties this year and none of them addresses Eminem in any depth. This is possibly because he debuted at the very end of the decade; but in many ways Marshall Mathers III was a creature of it. Raised in poverty and chaos on the east side of Detroit, he was a teenager during hip hop’s golden age, when microphone technique was paramount. He slogged his way through the independent hip hop scene before finding both his mentor, Dr Dre, and his voice. The whiteness that had been an obstacle (blame Vanilla Ice) became an asset. It enabled him to read as a rock star as well as a rapper, and licensed him to write explicitly about mental health issues. He was closer to Kurt Cobain than Tupac Shakur in that respect, his problems more internal than external. He didn’t deny it. “If I was black I would’ve sold half,” he rapped in “White America”.

The rap battles recreated in his 2002 quasi-autobiopic, 8 Mile, taught Eminem the importance of getting a reaction with every line, and nothing did the job like a bad-taste joke — the more offensive the better. Hence his shock-comic alter ego (or id) Slim Shady. “I’m only giving you things you joke about with your friends inside your living room,” he explained on “The Real Slim Shady”. “The only difference is I got the balls to say it in front of y’all.” A frequent comparison when he came out with The Slim Shady LP in 1999 was South Park. “Hi kids, do you like violence?” he leered on his debut single, “My Name Is…”, fully anticipating his role as corrupter of the nation’s youth. Shortly afterwards, the question of lyrics and violence, having steadily escalated through moral panics about heavy metal and hip hop, went nuclear with the Columbine High School massacre, as Eminem’s labelmate Marilyn Manson was accused of inspiring the killers. 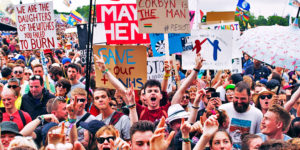 The toxic world of fandom

Using a technique pioneered by Public Enemy a decade earlier, Eminem performed lyrical judo, turning the backlash to his own advantage. It’s hard to file a case of cultural appropriation against someone who raps, “I am the worst thing since Elvis Presley/ To do black music so selfishly/ And use it to get myself wealthy.” Tough to accuse him of being a bad influence when he has a song called “Role Model”: “Follow me and do exactly what the song says: Smoke weed, take pills, drop outta school, kill people and drink.”

Most important, he had “Stan”, an extraordinary feat of in-character storytelling sweetened by a sample of a pre-fame Dido. Here was a song of such undeniable artistry that even the sceptics had to sit up and listen. Giles Foden, the Guardian’s deputy literary editor, compared “Stan” with the dramatic monologues of Robert Browning; Elton John performed it with Eminem at the Grammys. Years later, it gave us a new word for obsessive fandom. “It’s kind of like a message to the fans to let them know that everything I say is not meant to be taken literally,” Eminem explained at the time, with Columbine on his mind.

Two years later, Eminem’s sensitive performance in 8 Mile, with its motivational anthem “Lose Yourself”, made him almost respectable. Anthony Bozza sums up the rapidly changing media narrative: “(1999) Is he a novelty?; (2000) Does he matter; (2001) Should he be stopped?; (2002) How great is he?” He attracted fans as unlikely as Barbra Streisand and Daniel Day-Lewis, who used Eminem records to hype himself up on the set of Gangs of New York. Sean O’Hagan wrote in the Observer: “It is not overstating the case to say that Eminem is as reflective of his time as Bob Dylan was of his; and, in his own way, just as trenchant a social commentator.” Seamus Heaney praised his “subversive attitude” and “verbal energy”.

No artist can ride the zeitgeist for long, nor should any sane person want to, so there’s no shame in Eminem’s career dropping from a boil to a simmer. Time may not have improved him art but it has clarified it. First, his talent is beyond dispute. Even in the heart of the storm he was committed to hard work and craft. He has not inspired many (any?) great white rappers but his technique and emotional rawness are audible in the likes of Kendrick Lamar and Tyler, the Creator.

Second, it is obvious that controversy was not his motor after all. Unlike the many celebrities who fall from grace when their secrets are revealed, Eminem’s scandal was frontloaded and, despite some legal troubles, mostly stemmed from his lyrics rather than his behaviour. He’s not quite Snoop Dogg, who went from a first-degree murder charge to hosting a cooking show with Martha Stewart, but compared to Marilyn Manson, who faces multiple allegations of sexual abuse, or the endlessly self-detonating Kanye West, he looks remarkably stable and content. When it comes down to it, he simply loves to rap. Finally, we know what he believes. You might reasonably see in his early work a harbinger of the white male rage that now fuels the alt-right, including the trollish humour that leaves it strategically unclear whether provocation is an end in itself or a vehicle for genuine malice. In the original song, Stan writes fan letters with what sounds like a pencil and records his final message on a cassette. Now he might easily be shitposting on 8chan and fuming about his latest Twitter suspension. Similarly, “White America”’s vision of a ”fucking army marching in back of me” sounds more sinister than it once did: “So many lives I touched, so much anger aimed/ In no particular direction, just sprays and sprays.” We have a clearer idea now of where that anger can spray.

Nevertheless, I don’t think you can blame Eminem for that, any more than you can pin Brexit on Britpop. Crucially, his rage never included racial animus, and he has never swung to the Right. Having recorded a song attacking George W Bush in 2004, he released an anti-Trump freestyle in 2017 and donated “Lose Yourself” to a campaign ad for Joe Biden and Kamala Harris. “Anyone who’s followed my music knows I’m against bullies — that’s why I hate that fucking bully Trump,” he told Vulture. Eminem outgrew his anger, along with his homophobia and misogyny, rather than nurturing it, and he didn’t get lost in his own black comedy. The listener might not always have known whether he was joking or not but he did, and the joke was usually on him.

In “Without Me”, Eminem presents himself as an obnoxious necessity; a fly in the ointment of early 2000s celebrity culture. “Now this looks like a job for me/ So everybody, just follow me/ ‘Cause we need a little controversy/ ‘Cause it feels so empty without me.” Twenty years on, he’s smart enough to realise that we have more than enough controversy and that that fire doesn’t need stoking. Maybe he became a role model after all.