In Germany, this was a Victory in Europe Day like no other. Since Russia invaded Ukraine, Berlin’s entire postwar consensus has crumbled. Previously settled policies and cherished beliefs have dissolved in this new reality: the brutal return of war to Europe. All these confusions were displayed for the world to see on Sunday.

Usually — and appropriately — sombre, this year’s commemorations were agonised and dramatic. They kicked off with Berlin’s mayor banning Russian flags from war memorials. Then the city government banned Ukrainian flags — after all, they thought, violent pro-Russian activists might try and tear them down. Instead, Berlin police were filmed confiscating an enormous Ukrainian flag and it was viewed millions of times on social media.

Meanwhile, Olaf Scholz did not visit Moscow on Victory Day, as German Chancellors often do. But nor did he visit Kyiv, despite being invited to do so by Volodymyr Zelenskyy. By evening, the popular German sociologist Harald Welzer was debating Ukraine’s ambassador on a television chat show. What the ambassador did not understand, Welzer told him, was that the 45% of Germans against delivering heavy weaponry to Ukraine might have family memories of conflict. They simply wanted a negotiated ceasefire. Wouldn’t weapon deliveries merely prolong the agony? The memory of World War Two was being used by a German intellectual to argue for a ceasefire with a dictator. Who could have predicted that in 1945?

The new reality has proved to be an unpleasant one for Germany. Russia’s invasion brought out the worst in some Germans. Heated opposition to weapons shipments to Ukraine mirrors the Querdenker movement that took, hysterically and counterproductively, to the streets during the pandemic. Across the political spectrum, and in nearly every segment of society: church leaders, artists, intellectuals, far-Right Putin fans, old-school peaceniks, trade unionists, and huge numbers of social democrats. What unites them all is a special brand of German navel-gazing. “Lumpen pacifism” is the best way to describe it.

This crowd isn’t bothered that the German peace-through-trade policies of the last few decades have failed. Shortly after the war began, Chancellor Olaf Scholz proclaimed a “new era” in which Germany’s defence budget would increase to a level proportionate to the country’s size. But on the path towards providing ever-more military aid to Ukraine, he’s wobbled through a minefield of national anxieties: from the chilly prospect of Russia turning off the gas pipelines, to worries about nukes, to good old-fashioned queasiness about supporting violence on the battlefield — in eastern Europe of all places, as if the Wehrmacht still had boots on the ground there.

This is not a fringe movement limited to sandal-wearing Easter Marchers. On April 29, a group of intellectuals and artists spoke out against sending arms: they published an open letter to Scholz in Emma, a magazine edited by veteran German feminist Alice Schwarzer. “The delivery of large quantities of heavy weapons could make Germany itself a party in the war. A Russian counter-attack could trigger the collective defence clause under the Nato treaty and thus the immediate danger of a world war.” An online petition supporting the statement has been signed 225,000 times. Whether he realised it or not, Scholz’s initial reluctance to send heavy weapons to Ukraine was in accord with these sentiments. Many of the names on the list are admirable. But the participation of these ‘Professor Doktor’ types reveals a truth about numerous German public intellectuals: they exude ivory tower arrogance. Too many are out of touch with reality. They dismiss the massive responsibility Germany carries in this war — Europe’s largest economy has spent two decades prioritising lovey-dovey vibes with Putin over the security needs of Ukraine, long seen as a buffer zone between Russian and Western Europe.

One of the signatories was the actor Lars Eidinger, famous for his Hamlet. Unsettled by the backlash, he posted on Instagram (in English): “As an eighteen year old man I refused the so called service with the weapon in front of a jury of the German military, the so-called Bundeswehr. The essential question I had to answer was, when one of my beloved ones is threatened with a gun and I had the chance to kill the aggressor — how would I react? My answer was: I would not shoot, to not service the spiral of aggression. I still believe in this ideal today.” In short: “Blood cannot be washed by blood.” You’d hope a man so familiar Shakespeare might have grasped something about human nature. But no, at 46, Eidinger hasn’t progressed much since his days as a teenage conscientious objector.

He belongs to one of the last age groups to face mandatory military service, which was discontinued in 2011. By the Nineties around 50% of young men were opting out, citing moral reservations, and choosing Zivildienst (civilian service) instead. Which is fine, of course, but that sentiment lives on through today, particularly among West Germans shaped by peace-time entitlement and “never again” convictions. As pathological as it might be to cling to such views today, many share Eidinger’s beliefs. After reunification in 1990, Germans in West and East, consciously or subconsciously, internalised Francis Fukuyama’s End of History thesis. Perpetual peace, as Immanuel Kant imagined, was now a no-brainer. In the bright capitalist future cleansed of 20th century ideological extremity, a united Germany, cloaked by the EU, would gently spread a soft-power message of trade, democracy, and Eurovision throughout the continent. International law would keep nations in check. Conquest and savagery were relegated to the past.

The entire West fell for this, but the Germans more so than any other nation. It let them finally move on from their war guilt. There was an assumption that geopolitical power struggles had vanished with the Berlin Wall. Cosy trade arrangements would turn Putin into a loveable Euro-softy! But this era is over; it died when Russian paratroopers rained down on Hostomel Airport in February. Yet the peaceniks — like the Lutheran Bishop who said it was a good thing for Germans to be “helpless spectators” — are still getting air-time. Other people’s countries are easy to give away aren’t they?

On April 22, a journalist asked Scholz why he’d been timid about heavy arms. He concluded: “I am doing everything to prevent an escalation leading to a third world war. There must be no nuclear war.” Many Germans agreed. In an ARD TV survey carried out the same day, 40% of Germans favoured restraint so as not to provoke Russia. 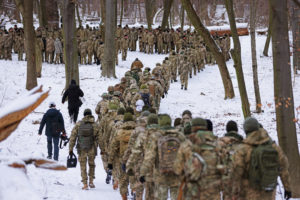 Then, at a May Day trade union rally in Düsseldorf, Scholz changed his mind. He delivered an uncharacteristically passionate speech and a new decisiveness: “We will support Ukraine so that it can defend itself. I respect your pacifism but it must seem cynical to a citizen of Ukraine to be told to defend himself against Putin’s aggression without weapons.” He was booed by many in the audience. Other speakers said the money should be ploughed into the German welfare state instead.

Germany’s allies in Nato were bewildered. Scholz changed course a few days later, and announced that about 50 Geopard anti-aircraft tanks would be sent to Ukraine. The decommissioned vehicles are 40-years old and the only ammo that could be found for them has to be shipped in from Brazil, but better than nothing. Things are evolving. In his Victory Day speech, without a crowd to boo him, Scholz promised to send more heavy weapons to Ukraine. If there is a lesson from Germany’s history, it is surely the one he outlined on Sunday: “No more war. No more genocide. No more tyranny.” More tanks and personnel carriers will be delivered to Kyiv.

But intellectual leadership is missing. On the same day the Emma letter was published, the 92-year-old philosopher Jürgen Habermas argued for a slow, deliberative approach to the crisis. As Scholz had previously intimated, Habermas feared potential nuclear war more than the actual bloodletting suffered by Ukrainians. “For thirty years, Germans lectured Ukrainians about fascism,” the American historian Timothy Snyder tweeted in late April. “When fascism actually arrived, Germans funded it, and Ukrainians died fighting it.”

The most resolute support for Ukraine has not come from Germany’s intellectuals, or the chancellor’s office. Surprisingly, it is the German Greens, who partially grew out of the peace movement, who have become the hawks. For years, they drew attention to Germany’s potentially lethal dependence on Russian fossil fuels. The party’s figureheads, economics minister Robert Habeck and foreign minister Annalena Baerbock, have been particularly vocal about Germany’s duty to sufficiently help Ukraine drive back the Russian invaders. Baerbock, in a visit to Kyiv, said that Germany aimed to cut its imports of Russian energy to zero, adding “and that will stay that way forever”.

This is the new reality. Germany will be Europe’s most preeminent military power within a decade. It will cut its energy ties with Russia. And it will be supplying Ukraine with powerful weapons in the months to come. Whether Germany’s pacifist lobby can stomach this, and whether they will be able to stop it from happening, is less certain.