Germany is known as the bordello of Europe. It is a hard-won title. With more than 3,000 brothels across the country, and 500 in Berlin alone, its sex trade is worth more than £11 billion per year.

Prostitution, in all its forms, is legal in Germany, and has been since the end of the Second World War. Recently, though, attitudes have been changing. People and politicians are demanding that the government take notice of the  “pimp state” and consider the terrible toll prostitution takes on its women and girls.

Germany’s “industrialised prostitution” is horrific, according to those who have survived it. The laws there give licence to pimps; they are referred to as “businessmen” and “managers” as they buy and sell desperate women. Cologne opened the world’s first drive-through brothel in 2001, and since then, more followed. There are “mega brothels” in cities such as Munich and Berlin which can accommodate around 650 punters at one time offering an “early bird” deal of a burger, beer and sex. At quiet times, some brothels offer “two for the price of one” deals, and “happy hours” with discounted rates.

Legalisation has helped expand Germany’s sex trade: there are an estimated 400,000 prostitutes, and around 1.2 million men (the population of Germany is a little over 80 million) who buy sex every day.

However, launched at an international conference in Berlin last week, a new report did much to shift the narrative about prostitution and its harms, in a country that has long defended and promoted the inside of a woman’s body as a suitable workplace. The report, “Men who pay for sex in Germany and what they teach us about the failure of legal prostitution”, was built on data from 96 German sex buyers and it validates much of what sex trade survivors, and legal scholars, have been telling the world for decades.

The men, aged between 18 and 89, were a generally diverse group, ranging from the unemployed and men in unskilled, low-income jobs, through to high-end professionals. The punters provided candid information about their attitudes, behaviours and motivations when it comes to paying for sex. They were asked questions like how does legalisation operate? Does it make the women safer? Has it resulted in a reduction in trafficking?

The research, spearheaded by psychologist Dr Melissa Farley, marks the final part of a six-country study on punters, built on data from lengthy interviews with 763 men in the USA, Cambodia, England, India, Scotland and Germany.

In Germany, the Prostitution Act of 2002 introduced full legalisation which classified the sex trade as a form of labour, and a “job like any other”. Pimps became businessmen, and the women “sex workers”. It swept aside all those post-war restrictions which said prostitution was “not prohibited but… immoral”. And, despite government attempts to regularise the sex trade, barely any pimps paid taxes: as few as 44 (out of 80,000) prostituted women registered themselves as such, despite it being a legal requirement. 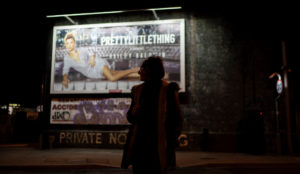 In 2017, following lobbying from feminists and testimony from police officers about the rising levels of criminality and violence under the legal regime, the government introduced a number of restrictions: pimps were no longer allowed to dictate which “services” the women should provide to punters; brothel owners had to apply for a licence; and punters were mandated to use condoms.

“Of course, there was no way of enforcing these regulations,” Angie*, a German sex trade survivor tells me. “Pimps are criminals who just want to make money, and [punters] can’t be made to put on a condom. We still had to do what we were told.”

In Germany, prostitution is seen as a necessity for men, and almost good for wider society. As one sex buyer put it: “The nature of men is that they have no control over themselves. But because they can use prostitutes, there are fewer sexual offences.” He couldn’t be more wrong, not only are sexual offences being committed against prostituted women, but in countries with legalised prostitution, rates of male violence tend to be higher than in others.

Many of the German punters interviewed have seen evidence of coercion, terror and violence towards the women. Regardless, they would all pay for sex. “The German system has effectively legalised rape, so long as it’s done to a prostituted woman,” said Alice*, another sex trade survivor.

One argument used by those in favour of legalisation is that if the men know they are not going to be arrested for buying sex, they would be far more likely to report any evidence of trafficking and underage girls being exploited. However, only one of the 96 German punters interviewed had reported evidence of trafficking to police. 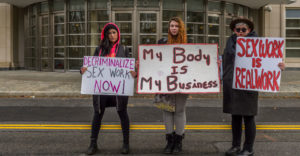 The problem is that, as one john said: “Once you’ve paid, you can do anything you like to her.” The men were asked if they were aware of violence from pimps towards the women. Many were, having seen pimps routinely commit violent acts that meet international definitions of torture. One man said: “There was one [pimp] who really beat up one of his women. With the fist two or three times in the face and thrown her against the wall.” Another reported: “When the women didn’t pay the pimp enough, they had their fingernails pulled off, or they beat the women to a pulp. The women were scared and never said anything.”

The sex buyers showed little to no empathy towards the women. “It’s like having a cup of coffee, when you’re done you throw it out,” said one. “It’s like renting an organ for 10 minutes,” said another.

There is no shame attached to being a john in Germany, which is a large part of the problem. Legalisation is supposed to reduce trafficking, violence, and the underground sex trade, but, as the report highlights, the opposite has happened, with illegal activities burgeoning alongside the legal ones.

To them, prostituted women are “unrapeable” and that if they can’t have sex with who they want, when they want, how they want, they will be compelled to, as one man said, “rape a real woman”. Three-quarters of the interviewees held this attitude. As one said: “Prostitution is good for society because men have an excessive sex drive and men can take it out on them without attacking other women or attacking children.”

Until 2020, Helmut Sporer was a detective police officer responsible for investigating and monitoring prostitution in Germany, including international trafficking. During his career, Sporer saw a steady deterioration in both the conditions for the women involved in prostitution and the response by the criminal justice agencies to effectively deal with the proliferation of organised crime and abuses within the system. For Sporer, this deterioration is not in spite of blanket legalisation — but because of it. 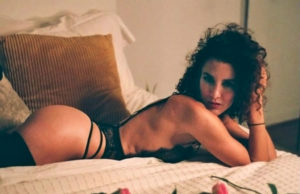 German punters seem to understand how abusive prostitution is: “Prostitution only works because the men are dominant,” said one.

So what would deter men from paying for sex? In Germany, it would require a change in the law. Legalisation would need to be repealed and replaced with a law that criminalises the purchase of sex, and assists women out of the sex trade. Incredibly, most men admitted that little else would stop them other than being added to a sex offender register or having a criminal conviction. This law has been adopted in Sweden, Norway, Iceland, Northern Ireland, Canada, France, Ireland, and Israel, and evidence shows that the approach curbs the sex trade in all its forms.

Wouldn’t it be a bitter irony if the German government were so appalled by the words of punters that this gave them the impetus to finally condemn its laws? In the words of Rachel Moran, the Irish sex trade survivor whose powerful speech closed the conference in Berlin:

“These men have validated everything [we] have been saying for years,” she said. “And I never thought I would say this, but ‘thank you’ to the punters of Germany, for giving the German government every bit of ammunition it needs to shut down its sex trade.”