It started on the morning after Tony Blair’s election victory in 1997. His wife, Cherie Booth, was photographed answering the door to a delivery of flowers at their home in north London. She was still in her nightie and looked half asleep, having arrived home from Labour’s victory party on the South Bank just a couple of hours earlier. Any thought of staying in their house in Islington vanished, she said later, and the couple moved to Number 10 that weekend.

It is hard to recall now, when we are used to seeing women with careers and children in Downing Street, what a break with tradition Booth represented. Blair replaced John Major, the quintessential grey man, whose wife Norma was described on the prime minister’s official website as providing ‘sterling support’ to her husband. As for the wives of previous Labour prime ministers, all been born before or during the First World War. The world had changed radically between the birth of Harold Wilson’s wife, Mary, in 1916 and Cherie Booth in 1954, and nowhere more so than in relation to the role of women.

Booth is a baby boomer, belonging to the post-war generation that challenged class barriers, sent millions of working-class kids to university for the first time and embraced feminism. She was already a QC when she moved into Number 10 and it soon became clear that the Downing Street press operation was struggling to handle media interest; at one low point, it even issued a press release explaining Booth’s recent weight loss. Every aspect of her appearance was commented on, an affront to any woman who wanted to be known for her professional achievements. But Booth seemed particularly uncomfortable in her own skin.

I knew Booth slightly, having met her and Tony Blair at a dinner party when we all lived in Hackney a few years earlier. Blair had not yet become party leader but he was on the shadow front bench and one of Labour’s rising stars. Booth was born in Lancashire, one of actor Tony Booth’s eight children by five different women; he left her mother, Gale Smith, when his daughter was eight. She has talked about the struggle her mother faced, bringing up two children on her own in Sefton, just north of Liverpool. The class difference between Booth and Blair struck me at once; he displayed the easy charm of a public schoolboy but she was less at ease, almost as though she expected to have to deflect criticism. I also thought she was in the difficult position of being married to a man who would be perceived by much of the world as the more attractive of the couple.

The next day, I got a call from our mutual friend: “Tony wanted you to know that everything he said last night was off the record.” I said it had been an unmemorable evening, with the exception of a slightly baffling conversation about how many members of the band Frankie Goes to Hollywood were gay. Years later, one of the other guests remarked that she had never met Blair or Booth when she lived in Hackney. She was astonished when I reminded her that she had once spent an entire evening with them.

I ran into Booth shortly before the 1997 election at a party thrown by my then publisher. There was a buzz in the room, created by the knowledge that the guest of honour was married to the man who was about to become prime minister. But the contradictions were already evident; to my generation of feminists, being known as someone’s wife was not something to celebrate. The discomfort I felt was underscored when I had a short conversation with Booth, who knew I now lived in west London. She mentioned Chiswick Women’s Aid, the famous refuge founded by Erin Pizzey, and suggested I should visit the residents. “They’d love a visit from a local author,” she told me. I winced, feeling like a character in a Jane Austen novel. 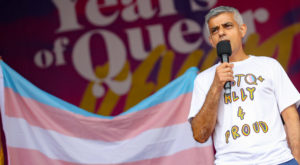 When the doorstep photo was published the weekend after the election, Booth hated it. Almost 20 years later, in 2015, she told the Guardian that “I look back at this picture and feel mortified”, even though other people thought it was “very human”. “I was very upset when the press said I was wearing some sort of nylon thing; it was a high-quality, cotton nightie from Next and I bought it especially for the campaign… It was a lot better than you might expect from a mother of three.”

Booth’s defensiveness is hard to understand. She was 42 at the time the photo was taken and looked girlishly young, but her anxieties about class are evident in the comment about what she was wearing (definitely notnylon). Her fear that the snap would damage her might seem paranoid, were it not for an extraordinary column written years later by the journalist Liz Jones. In 2019, Jones recalled the reaction in an unnamed newspaper office when the photo “was slapped on the editor’s desk”. ‘[Booth] was in a Next cotton nightie, hair a bird’s nest,’ Jones wrote. “She was suddenly no longer Superwoman, but Everywoman: fallible. I remember the glee in the office: a fissure! Bad news always sells better than good. We discussed headlines, ways to humiliate her further; we even sent a pretty intern round with another bouquet.”

The collision between Booth’s deep-seated insecurity and the reflexive misogyny of some sections of the media goes some way to explaining the rough time she had in Downing Street. She eventually acquired a lifestyle guru, Carole Caplin, a move that backfired and created excruciating headlines. A photograph of Caplin applying Booth’s lipstick on the marital bed at Number 10 raised questions about her judgement. Sometimes Booth’s reaction was to lash out, but she also had a habit of over-sharing. Jaws dropped when she revealed in her autobiography that she had become pregnant with her fourth child, Leo, during a visit to the Queen at Balmoral in 1999 because she had left her “contraceptive equipment” at home. The omission was caused by “sheer embarrassment”, she said, after the staff unpacked the contents of her toilet bag the previous year. It was an astonishing admission from a woman who got a first at LSE, yet was so embarrassed around servants that she was willing to risk an accidental pregnancy rather than being caught with contraception in her luggage.

Anxieties about class and money often go hand-in-hand. One of the most damaging criticisms of Booth was that she was obsessed with money, much more so than other adults with working-class backgrounds. I once ran into her at a reception in the Speaker’s House in Parliament, where she asked what I had been writing recently. I told her I had recently interviewed the designer Vivienne Westwood for The Times. “You should wear her clothes,” I suggested. “They suit curvy women.” It was a throwaway remark but Booth’s response took my breath away: “How can you afford Vivienne Westwood?” she demanded.

“It always struck me that she was insecure,” one of Blair’s former ministers told the Guardian after the couple left Downing Street. “And that is down to her background. Everything flows from that: the need for money.” Perhaps this explains why Blair, five years into his premiership, was forced to deal with embarrassing questions about Booth’s relationship with a financial advisor, Peter Foster, who happened to be a convicted fraudster as well as Caplin’s boyfriend. Booth was accused of accepting Foster’s help to get a discount on two flats in Bristol, where the couple’s eldest son Euan was at university. Number 10 initially denied the story, but the Daily Mail published emails between Booth and Foster in which she called him “a star” after he managed to reduce the price of the flats.

Booth made a tearful apology, but the episode earned her a reputation as greedy, which was reinforced the following year when a department store in Australia invited her to “take a few gifts”. The Mirror reported that Booth helped herself to 68 items, enough to fill five boxes, and left staff at the Melbourne store open-mouthed. It was as if she had little or no capacity to predict how her behaviour would appear, and the excuse of her impoverished childhood had begun to wear thin. Of course, the role of prime minister’s wife was never going to be easy for an ambitious woman from a generation shaped by radical ideas, including feminism. Booth inherited an unofficial position that already felt like an anachronism, something that was underlined when she was told by Downing Street that she would have to appear on official documents as Cherie Blair QC.

And yet sympathy for her, particularly over her unfair treatment by the media, must be tempered with an acknowledgment that she made some very unwise decisions, remaining ungracious to the end. “I won’t miss you lot,” she called out to reporters as the couple left Downing Street for the last time in 2007. It was an undignified exit, suggesting that Booth had never become accustomed to the scrutiny that comes with being the prime minister’s wife.

Perhaps she made a mistake, being bounced into moving to Downing Street in May 1997 before she had had time to consider the consequences, but a more confident woman would not have cared. Booth’s reaction to the doorstep photo signalled a vulnerability that some sections of the press seized upon, creating a conflict that lasted for as long as Blair was in power. Sarah Brown and Samantha Cameron were not always happy with the media but there hasn’t been such a polarising spouse in Number 10 until Carrie Johnson. Perhaps the kindest thing history could say about Booth is that she struggled to cope with a role she almost certainly never wanted.