What connects the tragedies of May 25, 2020, and May 14, 2022? The straightforward answer, at least according to many in the media and on the Left, is systemic racism.

On May 25, 2020, a black man was murdered in Minneapolis, Minnesota, by a white police officer. The incident was filmed by onlookers and posted on social media; suddenly, the whole world could see what American racism looked like. It was devoid of compassion. It was deadly. It cloaked itself in a white man’s uniform.

Two years later, almost to the day, there was a mass shooting at a grocery store in Buffalo, New York. Thirteen people were hit; ten were killed. Eleven of the victims were black; the suspected killer is white.

Racism almost certainly explains the attack in Buffalo. Payton S. Gendron, the suspect who broadcast a livestream during the attack, claimed he had been plotting an ambush since January. Police have since revealed that he is not from Buffalo and that he travelled for three and a half hours to the supermarket, which sits in the ZIP code with the highest proportion of blacks in upstate New York. Officials are investigating “a manifesto” he allegedly wrote, in which the author describes himself as a fascist, a white supremacist and an anti-Semite.

On the Saturday the shooting took place, I was in Dallas at a conference attended by a range of distinguished African Americans, ranging from Glenn Loury to the Supreme Court Justice Clarence Thomas. The key question we addressed was the following: what is holding back black America? The answer, it quickly became clear, had little to do with the phantom of systemic racism.

We started by acknowledging the huge progress that blacks in America have made since desegregation in 1964. We have had a black president who won landslide elections and remains popular. We have two black Supreme Court justices. We have black billionaires, academics, media personalities, actors and comedians. None of which is to say that America is any sort of utopia for black Americans. We also acknowledged the racial disparity in education, housing, crime and broken families. We expressed horror that while blacks make up only 12% of the population, they account for 55% of homicide cases.

What explains this disproportionate representation of black Americans? Taken in isolation, the tragedies in Minneapolis and Buffalo appear to suggest that answer lies in the behaviour of racist police officers and white supremacists. Given the nature of the atrocities, perhaps this conclusion is inevitable. What happened in Buffalo, for instance, can only be described as horrific: the cold, calculating shooting; the loss of life; the heinous views of the suspected shooter. How can we view such an atrocity and not let it overwhelm our judgement? How can we not conclude that such evil merits nothing sort of societal change?

Yet if the past two years have taught us anything, it’s that monocausal explanations are almost always misguided and, as a consequence, almost always ending up harming the vulnerable. As the Black Lives Matter movement mobilised following the murder of George Floyd, America descended into anarchy, fuelled by riots and slogans about systemic racism. When activists demanded that police departments be defunded, local stations were not exactly closed down, but they were intimidated to the point that many stopped serving in black neighbourhoods. The consequences of this swiftly became evident: in the same year that BLM fever seized the country, at least 8,600 black lives were lost to homicide, an increase of more than 1,000 on the year before. Thrown into a frenzy by their overzealous conviction that white racism is the root cause of all evil, BLM turned a blind eye to the large number of black Americans who were being killed, or who found themselves forced to live in neighbourhoods terrorised by gangs.

There were no protests or demands for meaningful policies to make black neighbourhoods safer. Rather, the movement’s organisers busied themselves by throwing parties at their $6 million Los Angeles mansion and deciding how to spend the $90 million received in donations. Why save black lives when you can while away your time spending more than $37 million on grants, real estate, consultants, and other expenses? 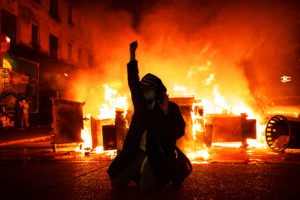 Still, at least that information is now available. Patrisse Cullors, a BLM co-founder, recently dismissed calls to make public BLM’s finances, describing the prospect of filling out an IRS Form 990 as “triggering” and “deeply unsafe”. Of course, it’s all too easy to dismiss her disingenuous victim fantasies as farce. But it is not just personal accountability that is missing here: ideological scrutiny is also effectively avoided, as critics are inevitably accused of being racist. Take, for instance, Roland Fryer, the celebrated African American economist at Harvard. He debunked the persistent narrative that the police kill more black than white Americans. For that, as well as his criticisms of education policy, he was effectively cancelled by his university. His research was deemed traitorous — and looking at the response to the Buffalo shooting from black activists and Leftist politicians, it is clear a narrative that trumpets the suffocating impact of racism still prevails.

But the facts are the facts. As Professor Fryer explained in Dallas at the weekend, there are racial differences in the use of non-lethal force by police officers, with blacks largely at a disadvantage, but not in officer-involved shootings. In his speech afterwards, Shelbey Steele, the author of White Guilt, summarised the implications of this reality: despite the fact that some racism does still persist, America remains the best country in the world to be black. We all applauded when he said that. It should not have been a sensational remark. And yet it was.

Everyone in that room understood, as the attack in Buffalo demonstrated, that certain individuals are motivated by a loathing for black people. But this shouldn’t define us, let alone the country we live in. For black Americans to progress, we need to cast off today’s dependency on white guilt for recognition and support. What is the way forward if you accept that blacks in America are free? It is to have the courage to live that freedom. It means holding ourselves accountable for our behaviour. It means learning to shape our destiny regardless of skin colour. And it means ignoring the divisive rhetoric propagated by those such as  Patrisse Cullors, Kamala Harris and Ibram X Kendi. 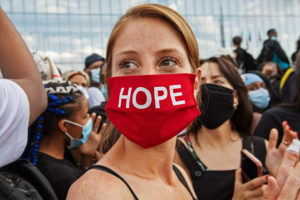 The white privilege of BLM

In Texas the day after the Buffalo attack, a shootout between five Hispanic men at a crowded flea market left two dead and three wounded. Roughly two hours later in California, a 68-year-old Asian gunman walked into a Taiwanese church and opened fire, killing one person and wounding five others. This is what crime looks like in America. It is chaotic, disordered and irreducible: the skin colour of its victims and perpetrators is far from fixed.

Racism, then, is not the whole story. In fact, racism has never been the whole story. Yet faced with an election year and an uphill battle to retain the House and Senate this November, perhaps it is unsurprising that so many Democrats are keen to turn the Buffalo shooting into another George Floyd moment: an excuse to deflect difficult questions, and to turn politics into a binary realm of Good and Evil. Once again, we’re told, either you’re with us or you’re a racist — even if being on the side of Good means exploiting the misery of others.