It’s not easy being a regular multi-billionaire. Bill Gates used to be the simple guy-in-the-mansion next door, worried about virus outbreaks and global warming. Then, during the pandemic he became the point at which all conspiracy theories met.

Ever since March 2020, the memes have spread. Was Gates a mass murderer with a global depopulation agenda? Was he a “biofascist” seeking control over the world’s population through vaccine passports and microchips?

It didn’t stop there. Was the Covid-19 pandemic actually “plandemic”? Did the Microsoft founder and his acolytes create it through funding “gain of function” research in a biosecurity lab in Wuhan? Was it all war-gamed at Event 201 in October 2019?

Bill Gates has not much enjoyed being the focus of these stories for the past 18 months. He just wants to help out. He wants to solve problems so badly, he tells us early on in How To Prevent the Next Pandemic, that in February 2020, he flew from Seattle to South Africa to participate in a charity tennis match, no doubt on one of his four personal jets.

It was in South Africa that he first began to join the Covid-19 dots. The tech entrepreneur delivers the story with characteristic flair: “A couple of days after returning from South Africa, I sent an email about scheduling something for the coming Friday night: ‘We could try and do a dinner with the people involved with coronavirus work to touch base.’” Gates is happy, “everyone was nice enough to say yes — despite the timing and their busy schedules”. His work on the pandemic begins.

Now Gates is tired of all the conspiracies. He asks his critics to judge him by his actions. And the best way to do so is by reading the book: does Gates have anything sensible to say about the best way to combat future pathogenic outbreaks?

His model for the future is built on what he feels has worked over the past two years: isolate contacts, close borders, lockdown as quickly as possible, then remove restrictions slowly and cautiously. He cites Dr Anthony Fauci, who Gates says he spoke to once a month during the pandemic: “Not only should you appear to overreact at first, as Tony Fauci said, but you also have to be careful about relaxing all NPIs [non-pharmaceutical interventions] too soon.” Meanwhile, you should invest enormous sums in boosting global public health systems, vaccine production in poor and rich countries, and fund a Global Pandemic Emergency Response Unit to monitor potential outbreaks. The aim, says Gates, is to vaccinate the entire world — twice if necessary — within six months while lockdown measures restrict the spread of the new pathogen. 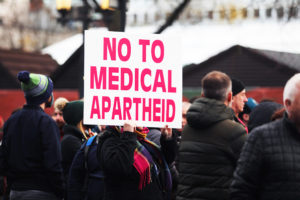 It all sounds so reasonable, doesn’t it? Or it might do to those who haven’t seen the footage of Shanghai’s lockdown circulating on social media, to those who can work online in relative comfort, or indeed to billionaires with comfortable gardens and libraries in which to while away those six months. With the Gates model, a little translation is in order.

The massive investment required to make this vision happen is a good starting point. Where will it come from? Gates is a well-known philanthropist, and makes much of the more than US$2 billion which the Bill and Melinda Gates Foundation have ploughed into fighting Covid-19. Yet this is a small amount compared to the US$6 billion that the US government has invested in the Moderna vaccine alone. As Gates points out, “Most of the world’s greatest talent for translating research into commercial products is in the private sector… It’s the government’s role to invest in the basic research that leads to major innovations, adopt policies that let new ideas flourish.”

Translation: taxpayers invest in developing products through government agencies, and private companies and their shareholders reap the profits. How does this work in practice? Gates does not give what we might call full disclosure. He offers the example of the antiviral Molnupiravir which “Merck and its partners developed”. It was authorised to great fanfare as a Covid treatment in November 2021. 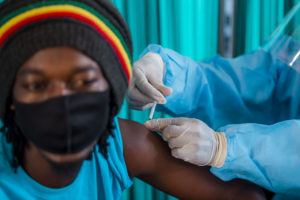 Yet Merck did not develop this drug. It was initially developed as a veterinary drug for horses at Emory University, with a US$19 million grant from Fauci’s NIAID and funding from other sectors of the US government. Molnupiravir costs US$17.74 per dose to manufacture, according to an estimate from researchers at Harvard and King’s College London, but is being retailed to the US government for US$712 per course — a profit of 4,000%.

Another example of Gates’s eye for detail is his discussion of Remdesivir, which was approved as “Standard of Care” for Covid in the US by the Federal Drug Agency. Again, like Molnupiravir, much of the funding and institutional support for the drug originally came from the US government. Remdesivir was the baby of the drug company Gilead.

Gates describes how one study showed that “it may have a major impact in patients who aren’t yet sick enough to be in the hospital”. But other details are ignored. He doesn’t tell us that in an earlier, peer-reviewed study from China, published in the Lancet in May 2020, “Remdesivir was not associated with statistically significant clinical benefits”, and that the trial was “stopped early because of adverse events in 18 (12%) patients versus four (5%) patients who stopped placebo early”. All the same, the profits were good: while the drug cost Gilead just US$10 per dose to manufacture, it was being retailed to US taxpayers at US$3,120. Why won’t The Lancet admit it was wrong?

Maybe Gates knows nothing about the Lancet study. Perhaps he doesn’t know that in both of these cases, public investment has funded enormous private profits — and that in the case of one of the drugs, there’s little evidence that this was to any benefit. He’s just a software engineer after all.

For Gates, technology really does provide all the answers, as it certainly has in his own life. He believes humanity belongs online: “once people learn the digital approach, they generally stick to it”. Post-Covid, he envisages a world of flexible working, in which regular guys like him with large mansions and decent living space can languidly choose between going into the office on Wednesdays or Thursdays. The problem with Gates’s digital utopia — full of virtual  spaces where 3D avatars attend business meetings — is that I suspect many of us will not want to live in it.

Gates tries to show in this book that he gets it, while at the same time demonstrating on every page that he just doesn’t. As he draws up his elaborate plans for global governance, Gates writes that he does so knowing that he hasn’t been elected. He tells us he wouldn’t want to be anyway (after all, we can surmise, if he were elected, he might be accountable).

Gracefully, Gates understands that people are angry at the huge increases in wealth disparities during the pandemic, and pledges to return his profits to “make the world a fairer place”. He recognises that poor people across the world have suffered, and are far less able to deal with lockdowns, and even acknowledges that harsh measures might not be a good idea in some of them… And yet he recently went on record as saying that “if every country does what Australia did, then you wouldn’t be calling it a pandemic”. We can, in fact, judge him by his actions, and his words: he says one thing, and funds and promotes others. Looking forward, the outlook is bleak. Preventing pandemics in Gates-World means shutting down immediately at the “next major outbreak” — a favourite, and alarming turn of phrase. Future semi-permanent global lockdowns are baked-in as the new normal, something I warned of in the conclusion to my book The Covid Consensus. As Gates notes, the WHO have identified 1,500 new pathogens in the past 50 years, and thus the “next major outbreak” surely cannot be far off. In the past 20 years, pre-Covid, there were already three of note (SARS — 2003; Avian Flu — 2005; Swine Flu — 2009). In each case enormous fatalities were falsely predicted, and would surely have led to six month shutdowns in the Gates model.

Gates-World is one where citizens make sacrifices for his model to work. And it’s also one where class is totally ignored. Does Gates know what it was like for Angolan children to be forced to stay at home for seven months in 2020? He admits that internet connections need to be improved to make digital schooling possible — but does he understand that no IT in the world can help children of sex workers in Mumbai slums with their homework? Can he comprehend what it is like to be incarcerated in a flat with small children for months on end in New York, Shanghai or London?

Gates wants to be respected, and understood. His world is one of innovative scientists having dinner with one another. They solve the world’s problems by the pool, or near the barbecue. It’s what he likes doing best, because “I’ve had some of the best conversations of my working life with a fork in my hand and a napkin in my lap” (p4). He wants to fund more and more work leading to experiences like this, and meanwhile turn the rest of human society into a digital avatar of itself.

No doubt he means well. But you don’t need to indulge the conspiracy theories to realise that the road to hell is paved with good intentions.