Is it Joe Biden who is the real fascist? Or Trump? Or is it actually… me?

The world is wearily familiar by now with the overheated and extremely public style in which America conducts its internal disputes, and Joe Biden’s speech for the American midterm elections last week was no exception.

Flanked by soldiers, Biden stood against the backdrop of Independence Hall in Philadelphia, where the US Constitution was written. The building was lit in ominous red. This “sacred ground”, the President said, was “where we set in motion the most extraordinary experiment of self-government the world has ever known with three simple words: “We, the People.” And, he intimated, this was now profoundly under threat thanks to “Donald Trump and the MAGA Republicans”, who “represent an extremism that threatens the very foundations of our republic”.

The remainder of the speech re-invoked American democracy while suggesting that Biden’s political opponents were a threat not to his presidency but to all of that 200-year-old project. Both sides claimed the speech as evidence that the other side is the real threat to American democracy.

Or perhaps the real threat is me? This, at least, is the implication of a recent article in US conservative journal National Review, which noted that I’ve suggested more than once lately that I think Caesarism may be the least worst option for future Western politics, and accused me of shilling for authoritarianism. Well, yes and no. I do think liberal democracy is probably doomed. But this isn’t the fault of either Left of Right, so much as deep structural reasons.

A couple of years ago, Adam Garfinkle made this case, in an essay examining the decline in “deep literacy” following the arrival of the internet. Delving into the interlocking histories of print, Christianity and democracy, the author argued that all three of these combined to create a particular type of subject well-suited to democratic governance. And, he suggests, the principal means by which such democratic subjects were shaped was long-form reading.

Long-form reading builds up an interlinked base of knowledge, held in long-term memory, that you can use to think with. But sustained engagement with long-form text also creates the capacity for abstract thinking, inner life as such, and a shared belief in objective standards and the value of deliberation.

Even today, there are striking overlaps between worldwide literacy and nations that embrace some form of democracy – which correlate strongly with the prevalence of Christian belief. All three coalesced in the founding of America, the new home for a polity whose emergence was bound up with the Christian Reformation that followed the arrival of the printing press.

Today, though, a nation founded in the convergence of Christianity, literacy, and democracy sees Christianity in rapid decline, as is the case across the West. Garfinkle argues that literacy is not far behind: for while on the face of it we’re reading and writing more than ever, in another sense we’re losing the central, print-era capacity for “deep reading”. In its place, prolonged engagement with scrolling, intertextual and interactive reading rewards us for losing unitary focus, and trains us not to concentrate but filter torrents of information via rapid-fire skipping across multiple sources. The result is a shift toward “continuous partial attention”. If “deep reading” produced democracy as its governing political form, what can we expect to see associated with its networked digital successor? As Garfinkle sees it, this would probably be toward “a less abstract, re-personalized form of social and political authority concentrated in a ‘great’ authoritarian leader”.

We may already be seeing this borne out. On this side of the pond, research by the think tank UK Onward revealed support for democratic norms falling with every generation, but then plunging sharply among those under 44. Notably, Onward’s data also show that after an authoritarian spike across the board, that coincided with Covid, every demographic has returned to more or less their previous dislike of strongman leadership — again, except those under 44.

And these trends are not just observable in Britain. Most young Western people are more authoritarian than their elders. Nor is this purely a case of young Right-wingers agitating for less immigration; young Left-wingers are also willing to steamroller democracy.

UK Onward identified always-online culture as a key factor in the longing for strongman politics. This would account for the inflection point around my generation (early 40s). I was 18 when my household went online; every generation younger than me has grown up in an increasingly digital culture. And if post-literacy is the technological and cultural water we all swim in now, this accounts for a number of emerging cultural and political phenomena.

It goes some way, for example, toward explaining declining youth support for the print-era ideal of “freedom of speech”, and in parallel the increasing youth support for censorship. Freedom of speech as an ideal was predicated on the scarcity of information; today, though, information is superabundant. And when you’ve grown up with personal experience of just how foul people can be online, you might well value the role of content moderators. So, today, the battleground is over who and what gets noticed – and who gets to set the parameters. We can also kiss goodbye to the “marketplace of ideas”. This might have seemed plausible when everyone aspired to long-form, deliberative, rationalism and a broadly shared moral framework. When these are things of the past, we all absorb disaggregated, de-contextualised snippets of information at speed, our reading material rewards us for not concentrating long enough to think something through, and we can see everyone else thinking in real time on our screens?

Well, it turns out that this makes “the marketplace of ideas” much more volatile, infectious, and politicised, and accordingly less willing to notice politically inconvenient facts. That is, less a vector for collective truth-seeking than an accelerant for conspiracy fantasy, purity spirals and unhinged meme wars. And this is chipping away at faith in the capacity of debate to make anything better.

In its place we find a growing tendency for political change to be driven by campaigning bodies that aim not to win by debating, but to do so by setting the parameters within which democratic political debate is able to take place. Whether it’s creating guidelines, writing school curricula, influencing legislation or shaping international standards or treaties, such activity takes place, by definition, prior to democratic deliberation.

Probably the case most familiar to British readers will be the Brexit debate over whether it was acceptable for the UK’s immigration policy to be set in Brussels, but other examples are legion. A lot of what’s said about “the deep state” is baroque conspiracy fantasy, but the phrase contains a kernel of truth: the political issues voters are able to influence via the polling booth are pre-set, in a process that’s increasingly obviously itself a political battleground, and one that’s largely insulated from democratic accountability. 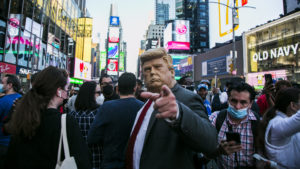 The age of attention politics

And this hints at more profound implication of Garfinkle’s argument. Mass democracy implies a capacity for long-form thinking, along with faith in freedom of speech, the marketplace of ideas, and the power of electoral politics to effect change. If these are all faltering, for structural reasons, what future is there for the central political ideal of the print era?

Those who have encountered the “Dark Brandon” meme, in which Joe Biden is approvingly depicted by his own supporters as a semi-supernatural authoritarian, might be tempted to point to this as evidence that the youth are itching for something a bit more, erm, forceful than their parents’ feeble polling-booth-based efforts. There is also the obvious and growing problem democratic polities have with mustering the “losers’ consent” which enables the losing political teams to accept a democratic result.

Biden characterised reluctance to accept the result of a vote as a unique property of his enemies. But it’s discernible across the political spectrum – and not just in the US. Alongside the short-lived Trumpist riot at Washington’s Capitol two Januaries ago, for example, we might note the multi-year elite rearguard action against the Brexit referendum result, and the progressive #Resistance against Donald Trump.

If I’m right, this will continue to get worse wherever networked reading is replacing the deep print-era kind. As this happens, we should expect tensions to grow, too, between generations with wildly divergent worldviews. This gulf also has a material component and complex downstream implications. This week, 10 Downing Street welcomed its fourth Tory premier in six years, every one of whom was chosen by Tory Party members skewed toward that older section of the British population that still mostly believes in democratic politics. And first move by the latest incumbent in this slippery seat has been to pile yet more debt on younger taxpayers – the group that increasingly doesn’t. Something will, eventually, give. How knitters got knotted in a purity spiral

It’s my sincere wish that our democratic ships will find a way to right themselves. But my fear is that they won’t. More than Trumpists, censorious students, anti-racists or whichever other group you view as political enemies, to my eye it’s the end of the print era that is the greatest threat to “democracy”. And the time to have done anything about it was around 30 years ago, when the first commercial ISPs launched.

Too late now. I suspect it’ll be a while yet before we see definitively what liberal democracy morphs into under digital conditions. But whether its aesthetics owe more to the Red or Blue Tribe, or to something else altogether, I predict the following: post-democracy will retain democracy-like rituals, but actual politics will happen well upstream of voting. And where such regimes exercise power directly, this will be couched in impersonal procedure that impedes direct accountability even as it enables more frankly authoritarian policies. In truth, the contours of this order are already visible: think of international treaties on emissions, Covid lockdowns across Europe, or Justin Trudeau ending the truckers’ protest by freezing protesters’ bank accounts.

So, am I hankering for authoritarianism? Truth be told, I’d be delighted to have the old political settlement back. But wishing won’t make it so. Accusing me of trying to conjure this shift into existence is like accusing someone who points out an oncoming tsunami of making it up because they really love swimming.

And if I’m right, it won’t matter how devoted older conservatives are to the print era’s flagship political form. If we just aren’t making the kind of people who founded that system, the system will become something new. And then, to paraphrase one of the great Left-wing authoritarians of the last century, Leon Trotsky: you may not be interested in Caesarism, but Caesarism will be interested in you.